On the verge of a new direction, Swampscott artist Samiljan ready for farewell exhibit

It’s difficult to decide what to show when you have so much accumulated artwork, especially if you’re Robin Samiljan.

Like a smooth-running motor, Samiljan’s artistic passion hums. She has created lots — and sold much of her artwork steadily over the 20-plus years she has been painting with watercolors.

But she still has a good number stored in various rooms and on the walls throughout her Swampscott apartment. In fact, the state of her living quarters reveals much about her work as an artist. On her dining room table, she has a griddle — not for cooking food, but to melt her beeswax with pigment and resin in various colors. On this same table is a large plastic bag filled with encaustic medium, a clear resin she also uses.

The good news is that she has much to exhibit; the bad news is she’s leaving the state next June to return to her roots in the Chicago area.

In the meantime, she is continuing to work at Montserrat College of Art in Beverly, and through Nov. 4, her exhibit of landscapes in watercolor and encaustics will be on display at Brushstrokes Gallery and Studios, located at 14 Prospect St. in Marblehead. An open house will be offered to the public on Oct. 21 and 28, from noon to 4 p.m.

But that’s not all.

For the next two Sundays, beginning Oct. 21, from 10 a.m. to 3 p.m., she will teach encaustic workshops for a group of up to 10 beginning and intermediate artists who want to learn about painting with beeswax. At the time of this interview, there were still a few spots open. The price for the Sunday workshops is $220 (visit brushstrokesgallerymarblehead.com to sign up), which will last five hours each Sunday.

“The first workshop will include learning the temperature settings, studio safety, controlling the medium, using layers evenly and image transfers,” explains Samiljan. “And on the second Sunday, the group will explore more independently — knowing what to bring after the first workshop.”

Attendees will have the option to purchase supplies, and everyone will produce at least one finished piece. Samiljan emits a powerful passion for her love of painting watercolors, but once she explored and learned encaustic painting in 2009, her spark ignited in full force.

She had been attending graduate school at Endicott College in Beverly and was ready to expand her horizons from landscape painting to abstract.

“That was the first time I thought I could try new stuff,” she says of her graduate-school years. “If I’m bad at it, it’s OK, I’m a student. This is an opportunity to explore.”

With the pressure of being a professional artist off, Samiljan directed her boundless energy into encaustic as a student. In one of her weeklong studio classes, she could do whatever she wanted. The first thing she tried was image transfer using beeswax.

“It was a success,” she says, smiling.

The process of taking a photograph and placing a photocopy of it on a board, melting on wax, letting it dry, and then removing the paper by rubbing it off, and then placing more wax on top, carving and adding texture, gives it a three-dimensional appearance.

She graduated in 2010 with her master’s of education in arts and learning degree, and her thesis was about the inner critic, a subject she knows all too well.

“I thought I was doing it wrong,” she says of her first encaustic works that were more representational landscapes than abstract.

It was only after she joined a private Facebook encaustic group and started scrolling through status entries with links to encaustic-related articles, and after she sold several of her image transfers, and after she submitted four pieces to Linda Womack, author of “Embracing Encaustic,” which will see her soon published in the third e-edition of Womack’s same book, did she gain confidence that what she was doing with beeswax was working. But she’s since taken a new direction with her abstracts. 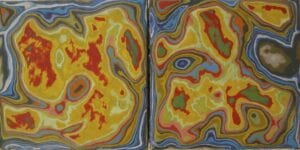 “I’m so excited about this abstract stuff,” she says with her usual enthusiasm. Following a conference she attended on encaustic painting, things changed for Samiljan. Her encaustic paintings have become more abstract. There’s an added texture of stonework and other materials within her landscapes that are barely comprehended as such, but when you look closely, you can see that there is a two-part river, or footsteps, or a watering hole. Her exhibit at Brushstrokes Gallery is all about the abstracts, some inspired by the Australian outback, based on a book she read that inspired her, titled, “Mutant Message: Down Under,” by Marlo Morgan. It is a fictional account of an American woman’s spiritual odyssey through outback Australia.

Weather has also inspired Samiljan’s abstracts. She considers many of her encaustic works to look a bit like the Doppler radar. It’s all land that she’s painting, but it’s made into the abstract.

For anyone who would like to take Samiljan’s workshop but can’t make it this Sunday, there will be another opportunity at Brushstrokes Gallery in January. Beyond this, Samiljan hasn’t thought much about doing any other exhibits before she leaves for Chicago, where she will seek out more opportunities as an artist. With a resume that includes many awards from the Marblehead Festival of Arts, and other honors from the Copley Society of Arts, among other organizations, it shouldn’t be too difficult.